MILAN, June 30, 2022 – Webuild is ready to propose a project that would contribute to a definitive solution to the severe water scarcity afflicting Italy in a structured – rather than episodic – manner, addressing the long cycle of global warming. The Group is working on a project that it will soon present to government and institutional officials. It consists of concrete solutions to pursue in the short term with the construction of desalination plants that turn sea water into drinking water. The plants would meet the dramatic need for water in a stable and structured way, bringing Italy in line with the standard followed by countries that have already invested in desalination plants for the production of drinking water, often using Italian technology and know-how.

“Relying on the Group’s enormous global experience with water and its production cycle that includes desalination, we want to promote an integrated project that allows the country to resolve this endemic problem that is getting worse. Our subsidiary Fisia Italimpianti has already built a good part of the desalination plants in the Middle East, making life possible in the cities surrounded by desert like Abu Dhabi, or cities with high water consumption like Dubai. The lack of water in Italy is a historic problem, and it is not simply connected to climate change. We need an immediate and structured plan to resolve once and for all the country’s deep water crisis, taking advantage of the positive momentum behind the development of infrastructure and the experience of institutions and entrepreneurs who together can provide solutions to the problem for the country and Italians, even turning to the PNRR (the National Plan for Recovery and Resilience) for resources,” said Webuild Chief Executive Pietro Salini.

Lack of rain and inadequate infrastructure: Italy faces the problem of not only having a limited production of water by a small number of desalination plants, but also a chronic lack of maintenance of distribution plants. Nearly one billion cubic metres of drinking water is wasted every year, more than a third of all the water available.

In 11 towns and cities, all of them in the so-called Mezzogiorno (southern region of Italy), measures have been adopted to rationalise the distribution of water. The top seven regions that suffer from water distribution (the percentage of families that have no water) are Calabria (39%), Sicily (22%), Abruzzo (17%), Campania (16%), Molise (15%), Sardinia (13%) and Lazio (12%).

In Italy, 32% of the population have little access to drinking water – an estimated half a billion of cubic metres every year. Their demand for water could be satisfied by the guaranteed production of water by desalination plants, much like in many countries in the world. Italy has 4% of desalinated water production compared with its total water consumption (in Spain it is 56%, in Australia 26%). It is done by mostly small plants on small islands (Lipari, Elba and Ischia) – even though the country is a peninsula surrounded by a number of seas.

The Webuild Group, a global leader in infrastructure in sectors like water, is active in the entire water cycle, from the supply of drinking and irrigation water to the treatment of wastewater. It has identified solutions to the country’s crisis involving the construction of desalination plants that have already for decades been operating in many arid regions of the world. Through Fisia Italimpianti, Webuild is a leader in the sustainable planning and construction of plants for treating water and desalination, with a production equal to six million cubic metres per day of treated water, satisfying the daily needs of a combined total of 20 million people throughout the world. The Group was also behind the construction of a very complex plan in Nevada in 2016 to guarantee water supply to Las Vegas. It included a hydraulic tunnel called Intake No. 3 at Lake Mead, which is ready to go into service whenever a lowering of the surface level of the artificial lake puts at risk the needs of nearly two million residents in the city and surrounding area. 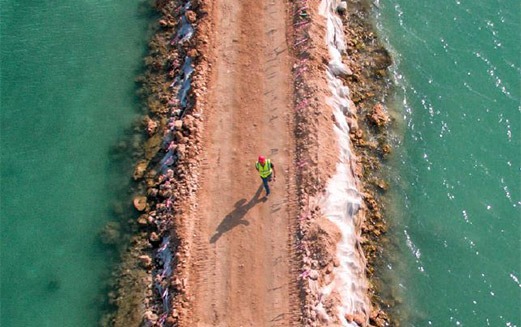